The Sanskrit term “stupa” means “memorial to enlightenment.” A stupa symbolizes the Buddha’s mind of universal compassion and profound wisdom. The Stupa at the Tibetan Buddhist Learning Center (TBLC) is located at the very heart of the TBLC campus. It was built as a traditional shrine for TBLC founder Geshe Wangyal after his death in 1983, and it contains Geshe-la’s ashes encased in the clay of small statues. His Holiness the Dalai Lama consecrated the Stupa on his visit to TBLC in 1984. 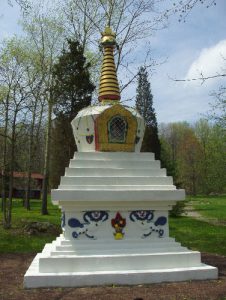 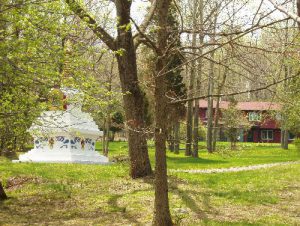 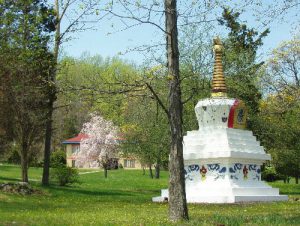 The Stupa was dedicated to the female Buddha Tara because Geshe-la closely depended on her for help, crediting her with extending his life. Before the Stupa was built, the TBLC resident monk-scholars petitioned her blessings to consecrate special vases that were then placed at certain points within the Stupa.

The twenty-one-foot-tall Stupa contains many other sacred objects, all placed around a central cedar post and sealed within the structure’s poured concrete. There are special relics of the Buddha (ring bsrel) that Geshe-la had collected. Geshe-la had also gathered over the years many relics of the great teachers of all the different traditions in India and Tibet. In particular, Geshe-la possessed some relics of the founder of the Gelug tradition of Tibetan Buddhism, Venerable Tsong-kha-pa, which he had received from the late Kyabje Trichang Rimpoche, junior tutor of His Holiness the Dalai Lama. All these now lie within the Stupa. Many more of such relics were provided for the Stupa by Geshe-la’s alma mater, Drepung Gomang Monastic College. In addition, there are numerous scrolls of prayers and mantras placed throughout the Stupa. Also within the Stupa is a clay statue of the elephant-headed deity Ganesh that Venerable Tsong-kha-pa made with his own hands. Geshe-la had obtained this while he was residing in Tibet.

The Tibetan Buddhist Learning Center, Inc. is a non-profit, tax-exempted, religious organization operated only on donations.